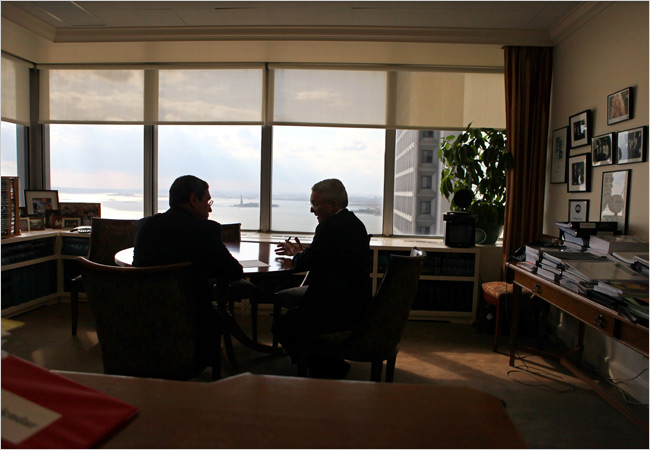 This weekend, the NYT ran an interesting article by a former waiter at one of New York’s Michelin three-star restaurants, who is now a graduate student:

In a playground for the superrich, I was an overpaid chaperone wearing a bespoke suit. Gluttony was common. So was sex; more than once we had to interrupt coitus in the restroom. Once a woman asked to leave her baby at the coat check. When the maître d’ explained that dinner lasted at least three hours, she stared back at him, unfazed. “Yes, I know.” Grown men wearing Zegna and Ferragamo would sit at the bar chanting, “We are the 1 percent!”

The nightly grotesquerie was almost exciting. But something happened after spending too many nights delivering four- or five-figure checks on silver trays. Estrangement did set in. I imagine pick-up artists experience something similar. You learn what people want from you, and, for a while, you get a high making all the right gestures: the perfectly timed joke, the wry smile. But, deep down, you feel nothing.

The article’s author manifests what Peter Berger described as sociological consciousness, that is, a kind of ironic detachment from particular social situations that sees them from the outside, as it were, even as one is inside the social ritual being played out by the participant-observer. This sort of consciousness leads, Berger argues, to among other things a kind of pervasive debunking mentality, a sort of “seeing through” of both the rituals of one’s day to day life, and the orthodox belief systems of the broader culture.

That mentality creates many opportunities for, on the one hand, consciousness-raising, reform, and even various types of revolution, social and political, and, on the other, cynicism, pessimism, disgust, quiescence and despair.

I’m particularly interested in the ways sociological consciousness might play a role in unmasking and delegitimating certain noxious forms of social hierarchy: those that are created or more commonly reinforced by various types of pseudo-scientific ranking systems. Consider the Michelin star system for restaurants, which has mutated over the past 80 years from a modest practical guide for travelers into a sort of bible for the international foodie cult. The desperate striving for stars, and especially the almost deified status of a three-star restaurant, produces the obsessive compulsive perfectionism, both inhumane and creepy, detailed in the NYT piece.

Here’s an example from another field, although one that, with its obsession with servicing the whims of its well-heeled clientele, no matter how idiosyncratic or unreasonable, indicates that there are quite a few parallels between the worlds of elite restaurants and elite law firms (Sullivan and Cromwell is a so-called “V5” law firm, meaning it’s one of the top five law firms in the Vault rankings, which are produced by asking associates at law firms to “rank” firms in various practice areas, and overall. If this sounds absurd, that’s because it is, but many law students and junior lawyers pay inordinate attention to these rankings, because they’ve been socialized since birth, or at least preschool, to obsess on rankings of every sort. The passage below was written by a former associate at the firm):

Based on your reaction to getting the offer, this is probably the best thing that could have ever happened to you. I encourage you to enjoy the summer and take accept their offer as nothing in the world will cure you of your prestige obsession quicker than some time at S&C.

During orientation, they’ll give you an S&C shoulderbag and you’ll wear it with the S&C logo facing outward so any other commuters in the know can see it and you’ll just know that they’re either impressed or envious. And that will make you happy and proud. And then you’ll try to figure out the best way to ensure that you’re sworn in as soon as possible after receiving your bar results because then you’ll get the box full of business cards that say “Sullivan & Cromwell LLP” with your actual name underneath. You’ll be giddy at the thought of casually passing one (mid-conversation) to some acquaintance from undergrad you’ve lost touch with.

You’ll start working and you’ll notice that there are an awful lot of “Farewell” emails and someone will tell you that the farewell emails can only contain 4 names at a time per firm policy because the partners decided sometime in 2004 that emails indicating 6 or 7 people were leaving the firm in a two week period might cause some unhelpful whispering. You’ll talk to a midlevel associate who is super-psyched to work at S&C and you’ll find out that he (not a lot of shes) lateralled from some firm that frankly you would never have considered working for (too TTT for you). When you get back to your office, this will trouble you a bit, you’ll wonder if your own escutcheon is being blemished by the presence of this type of person (i.e., non-elite) at your S&C. But that feeling will pass as you’ll find plenty of other like-minded first years who equally relish the prestige as you you head for a drink at Ulysses (shoulderbag logo facing outward).

Then you’ll get staffed on your first big deal and you’ll work late night after late night and then on the weekend and on to the next weekend and then on to the weekend when you had planned to go to a friend’s wedding. And you won’t go because the work has to get done and you have dues to pay (or so you’ll be told). You’ll get a little bit upset about this turn of events, but the arrival of those business cards will soften the blow.

You’ll meet more and more laterals from firms that you would never work for (some you’ve never even heard of). You’ll note in the farewell emails that some of the junior and midlevel associates leaving S&C are going to those very same firms. Survival of the fittest you’ll say. But late at night, when the air conditioning clicks down from a barely perceptible hissing sound to complete silence, these things will bother you. But you’ll tell yourself you’re just tired and frustrated and anyway you have work to do.

You’ll have lunch with Rodge and he’ll tell you that business is good and that he’s listening to associates’ concerns about quality of life issues. You’ll notice that some of the senior associates visibly roll their eyes at each other when this comes up, but you won’t mind that much because, really, what other firm’s managing partner regulalry has lunch with associates to hear their concerns (and takes notes!)

A few months will pass, a few marathon deals will happen, you’ll have to re-schedule a vacation but you’ll tell yourself that that is to be expected.

About a year in, a couple of your classmates will crack and start talking about how much the job sucks. They’ll very likely have gone to Yale Law School. You’ll joke that they couldn’t hack it when they leave the firm for a clerkship, or an academic position or to go to a firm in another city.

Things will go on in this pattern and you’ll notice the fact that you’re working a lot harder than your friends who went to “peer” firms. At first you’ll be proud of this and brag about it, but after a while you’ll find yourself downplaying it. At least when you have the time to get out and socialize with your law school friends.

Something will happen: a partner will scream at you, a senior associate gunning for partner will blame you for her mistake, the partner will tell you that the trip to Europe your spouse meticulously planned just won’t be able to happen (he’ll be really sorry and will tell you a funny story about the exotic vacation he missed or cut short). Doesn’t matter what, but you’ll get really pissed and you’ll start to take some of the 4 or 5 calls from headhunters that you’ll receive every day at that point (vultures spell blood). They’ll give you the names of firms that you laughed on in the days when you posted on the XOXO board, but you’ll find yourself looking into them. The headhunter will encourage to just listen to their offer and you’ll consider doing so. But you won’t leave because then you’d have to give up your business cards. And stop wearing the shoulder bag. And the bonus is only x months away so you’ll start thinking about it then.

Until one day you won’t be able to take it any more and you’ll find yourself arranging to meet with people from a lightly regarded firm for a position in their New York office. And you’ll worry that the XOXO crowd will see you.

And you don’t believe any of this will happen, but I suggest you print this out and keep it in the top desk of your drawer so late at night when you’re feeling sorry for yourself, you can add to the list of reasons to be miserable this fact: someone told you this was going to happen and you thought that person was crazy.

Now the exploitation of head waiters at three-star restaurants and associates at Wall Street law firms are classic first world problems, but both are still real problems: and they are exactly the kinds of problems enabled by the invidious social effects of obsessive rankings systems, and the hierarchical structures such systems simultaneously reflect and support. And sociological consciousness — the ability and willingness to step outside those structures, while seeing through the essential absurdity of such rankings systems — can be a politically powerful thing.