Today is the 33rd anniversary of one of the most staggering promotional failures in American sports history. On 4 June 1974, fans who showed up to watch the Cleveland Indians host the Texas Rangers were treated to a remarkably ill-conceived event known as “Ten Cent Beer Night.” Throughout the game, vendors dispensed tens of thousands of cups of Stroh’s beer to the 25,000 irascible fans who filled the soul-less, bug-infested cavern otherwise known as Cleveland Municipal Stadium. The result, quite predictably, was ugly.

The 1960s and 1970s were an awful time for northern Ohio, as the departure of heavy industry and the frenzied flight of white residents to the suburbs helped cut the city’s population nearly in half from its post-World War II high of 900,000. By 1974, Cleveland was five years past the infamous Cuyahoga River chemical fire and four years from declaring bankruptcy. For those who were able to struggle out of bed on June 4, the opportunity to drown in cheap alcohol must have seemed like an instance of divine intervention.

As fate would have it, a similar cheap beer promotion grew out of hand the previous week, when the Rangers and Indians met in Arlington, Texas. Midway through that game, the teams brawled, and Rangers fans responded by tossing cups of beer onto the field. Nothing that night, however, rivaled the lunacy that ensued in Cleveland when the Rangers arrived for a three-game series on June 4; averaging a mere 8000 fans per game that season, Cleveland Indians officials hoped that alcohol might create a buzz that their team’s players themselves could not.

During the first few innings, tipsy fans tossed smoke bombs and firecrackers at each other. By the second inning, a topless woman had leaped onto the field and chased down one of the umpires for an unwanted kiss; another streaker joined the Rangers’ Tom Grieve as he circled the bases following his second home run of the night; a father and son team ran into the outfield and dropped their pants. Meantime, golf balls, rocks and batteries rained down on Texas’ players throughout the game. At one point, someone heaved an empty gallon of Thunderbird wine at Rangers’s first baseman Mike Hargrove. As the game neared its conclusion, the evening descended into total chaos. During the ninth inning, the Indians managed to tie the score and placed the winning run on third base. At that point, a fan ran into the outfield to steal Jeff Burroughs’ glove. When Burroughs began chasing the fan, Rangers’ manager Billy Martin, along with several of Burroughs’ teammates, rushed to help out — several of them, including Martin, carried bats. 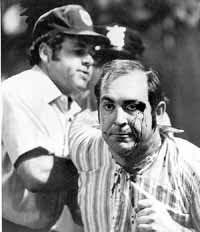 Not caring that their team was about to win a rare victory, the most intoxicated people in Cleveland began throwing hot dogs, beer cups, broken seats and glass bottles at their guests from Texas. Thousands of fans stormed the field, some of them brandishing chains and knives and metal chairs.

Within minutes, the umpires’ crew chief Nestor Chylak had invoked Rule 3.18 and forfeited the game to Texas. Chylak later described the fans as “uncontrollable beasts,” adding that he had never seen anything quite like it, “except in a zoo.” American League president Lee MacPhail concluded that beer “played a great role” in the affair.

(Cross-posted at the Axis)