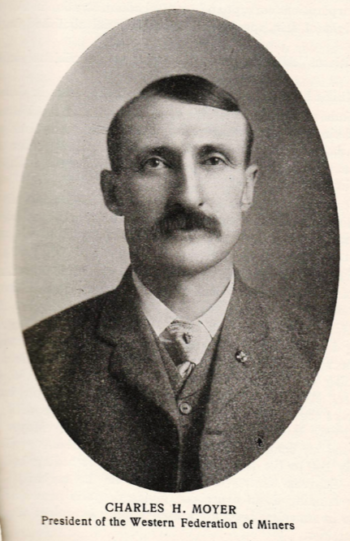 On January 6, 1909, oral arguments before the Supreme Court concluded in the case of Moyer v. Peabody. The decision by the Court on January 18 gave official approval for the state militia or National Guard imprisoning people without the benefit of habeas corpus during a time of insurrection, the definition of which was of course left vague. This was one of many anti-worker Supreme Court decisions of the Gilded Age that made it extremely difficult for unions to operate with any sort of effectiveness.

In 1902, the Western Federation of Miners was organizing mill workers in Colorado City, Colorado. One company placed a spy among the organizers. This led the employer to fire 42 union members. Tensions rose at the mill and in February 1903, the WFM called a strike. Colorado governor James Peabody was an anti-union extremist who would use any method to eliminate the WFM, which had outraged employers in 1894 with an overwhelming victory in the state’s mines. Throughout Colorado that year, several strikes took place. Peabody worked with employers and private detective agencies such as the Baldwin-Felts, Thiel Agency, and of course the Pinkertons. Peabody called out the Colorado militia in response to the Colorado City strike, leading miners in Telluride and Cripple Creek to walk off their jobs. Mass arrests of strikers began that fall. Among those arrested was Charles Moyer, president of the WFM. Moyer had done nothing more than travel to Telluride to support the strike and sign a poster denouncing the mass arrests. He was then arrested for desecrating the American flag. This ridiculous charge allowed him to be released the next day, but he was immediately rearrested without any charges. The strike was soon crushed by Colorado and Peabody’s forces, but Moyer fought the obviously unconstitutional arrest he faced. He petitioned for a write of habeas corpus to a Colorado court. He received it but the Colorado attorney general refused to honor it. He appealed to the state Supreme Court, which ruled that his constitutional rights had not been violated by his arrest for supporting a strike. He then appealed to the U.S. District Court based in Missouri. These judges overturned the state court and granted him the writ once again on July 5, 1904. This finally forced Peabody to let Moyer out of jail. Moyer wanted full exoneration so he took his case to the U.S. Supreme Court. It eventually accepted it, with oral arguments taking place on January 5 and 6, 1909. By this time, Moyer had survived the framing of he and Big Bill Haywood for the 1905 murder of former Idaho governor Frank Steunenberg, thanks to the extremely shoddy case and the defense skills of Clarence Darrow leading to the rare court victory for unions during these horrible years.

Oliver Wendell Holmes wrote the decision for the unanimous court. The decision completely ignored whether the strike was an insurrection. It gave the governor complete discretion in making this determination, effectively saying that if the governor called out the National Guard, there was in fact an insurrection. He wrote, “But it is familiar that what is due process of law depends on circumstances. It varies with the subject-matter and the necessities of the situation.” And while it makes some sense for law to have limited flexibility dependent upon the particulars of a given situation, in this situation Holmes was giving employers and their bought politicians carte blanche to do whatever they wanted to labor unions. So long as there was an insurrection, then the governor could call out the state militia or National Guard and have them act accordingly. He left open the possibility than an exceedingly lengthy time behind bars might be open to another challenge but that was not what Moyer was after. This decision also avoided any of the sticky constitutional questions–since the states cannot declare war, can the executive of a state declare a state of war to exist? But as was common for Holmes, he found ways to exclude ideological or racial minorities from full citizenship; unfortunately, he was frequently joined in the Gilded Age Supreme Court by his colleagues.

Holmes’ decision in Moyer v. Peabody helped to radicalize the labor movement, especially in areas that had already seen the iron fist of state violence. With Holmes giving governors the right to use violence at will, moderate unionists had a harder time telling workers that capitalism might work for them. The Industrial Workers of the World would build their case for radical syndicalism upon this point, up to the point where the IWW was itself crushed by massive state-sanctioned violence, including the government allowing employers to do what they wanted to unions and with government crushing workers defending themselves against that violence.

The case was so shoddy that the Court largely ignored it. In 1932, it revisited the ability of a governor to unilaterally decide to call a strike an insurrection, when in Sterling v. Constanin, it decided that the governor of Texas doing the same as Peabody was not constitutional. That is until 9/11. Then the Bush administration was all over it because of the possibility to justify indefinite detention whenever the government declares a state of insurrection. It was heavily discussed in the 2004 case of Hamdi v. Rumsfeld and remains an extremely threatening decision to workers today as Republicans seek to return the nation to the Lochner years. And the Moyer v. Peabody years as well.

Although Charles Moyer eventually broke from Haywood and the IWW, he remained deeply involved in union politics for many years. He was in Hancock, Michigan when the Italian Hall disaster took place in 1913 and rallied the WFM in nearby Calumet to take care of their own, although this had the effect of telling impoverished survivors to not take much needed charity. While in Calumet, he was beaten and deported from the town while bleeding from his wounds. The state did nothing to find who did this to him. He continued to lead the former WFM, now Mine, Mill, until 1926, dying in obscurity and largely forgotten in 1929.

This is the 206th post in this series. Previous posts are archived here.